The history of aviation in the Ocala, FL, area began in 1927 when Ruperty Cavanas persuaded Jim Taylor to donate land to the City of Ocala for development of an airport. By 1928, Jim Taylor Field had been constructed. In early 1941, Mr. Frank Hanley came to Ocala and established a contract pilot school for the Army/Air Force. The school had originally been designated for Greenville, Mississippi, but due to Ocala’s desire to have an airbase, it was located in Ocala. The school began training pilots in late 1941 under the name Greenville Aviation. Greenville Aviation operated until 1944, when it closed due to an overabundance of pilots and the impending end of World War II. In 1947, Eastern Airlines began servicing Ocala through this airport using Douglas DC-3 aircraft and continued service at this location through 1967. In 1962, the Federal Aviation Administration (then the Federal Aviation Agency) believed that a new airport should be constructed in Ocala. The city was growing around the airport, and airport expansion was needed to accommodate larger general aviation and commercial aircraft. The city issued bonds to finance construction of the airport, which included a 5,006-foot runway, parallel taxiway, terminal building, runway and taxiway lighting, and a weather reporting facility. The airport became operational, and Eastern Airlines began service at the new facility in 1968. Eastern Airlines served Ocala for approximately four more years. In 1972, Eastern Airlines moved its service to Gainesville Regional Airport, which is approximately 37 miles to the north of Ocala. Under an agreement with the City of Ocala, a commuter carrier moved in to serve the Ocala area. However, this was accomplished with the understanding that if the commuter carrier discontinued service, Eastern Airlines would then reinstate service to Ocala. In 1971, the Civil Aeronautics Board approved a plan by Eastern to serve the Ocala market through Gainesville. This decision relieved Eastern of its obligation to return service to Ocala. Since 1971, five different commuter carriers have served Ocala with the last being Allegheny Commuter. Commuter service was discontinued in the early 1980′s and remains so to the present day. Currently, air taxi and charter flights are the only remaining air service available at Ocala. 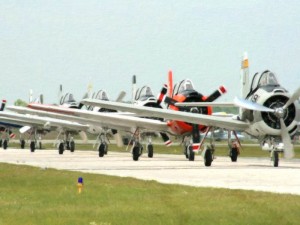 The 1968 facilities were expanded over the years to keep pace with the growth of civil aviation. In 1973, a 3,010-foot east/west crosswind runway was added off the north end of Runway 18/36. In 1988, Runway 18/36 was extended 1,900 feet to accommodate even larger aircraft. Over the years, the airport has been upgraded with a localizer approach on Runway 36, precision approach path indicators (PAPIs) on Runway 18/36, new runway and taxiway lighting, a parallel taxiway for Runway 8/26, conventional hangars, T-hangars, expanded apron areas, and a fixed base operator. In 1994, the airport acquired approximately 400 additional acres of land adjoining the southwest portion of the airfield for future aviation development, bringing the total acreage of the airport to 1,532 acres. In 1995, airfield signage was installed and existing signage was corrected to meet Code of Federal Regulations (CFR) Part 139 “Certification & Operations: Land Airports Serving Air Carriers” regulations.  Additionally, an Instrument Landing System (ILS) was installed, an asphalt overlay of Runway 8/26 and its associated taxiways was completed, and an extensive obstruction removal program began to remove trees and other obstructions to air navigation. The following is a summary of recent projects:

Aviation Activity and Facility Use (August 2002)

Ocala International serves the needs of general aviation, corporate aviation, and the air cargo industry. The largest plane that uses the airport on a regular basis is the Gulfstream V. However, aircraft such as the Boeing 727 and 737 and the Douglas DC-8 are occasional users of the airport. The current Airport Reference Code (ARC) as defined by the FAA Circular 150/5300-13 for the airport is C-III. General aviation constitutes a considerable portion of the airport’s annual activity.  According to the FAA records there are 170 based general aviation aircraft at the airport. Of this total, approximately 20 percent of the aircraft are stored on paved tie-downs, and the remaining percentage are in T-hangars or conventional hangars. The airport has no aviation training programs that are connected with any of the local colleges, universities, or technical schools.

Ocala International is served by two runways, Runway 8/26, which is 3,010 feet long by 50 feet wide and Runway 18/36, which is 7,467 feet long by 150 feet wide. These runways are both asphalt and in good condition. Both runways are served by full-length parallel taxiways.  The airport has a 4,000-square foot general aviation terminal and a 1,900-square foot administrative building with 72 paved automobile parking spaces for airport patrons. There are currently over 50 tie-downs for airport’s general aviation aircraft, and between the airport’s T-hangars and conventional hangars, there are over 100 enclosed parking spaces for aircraft.